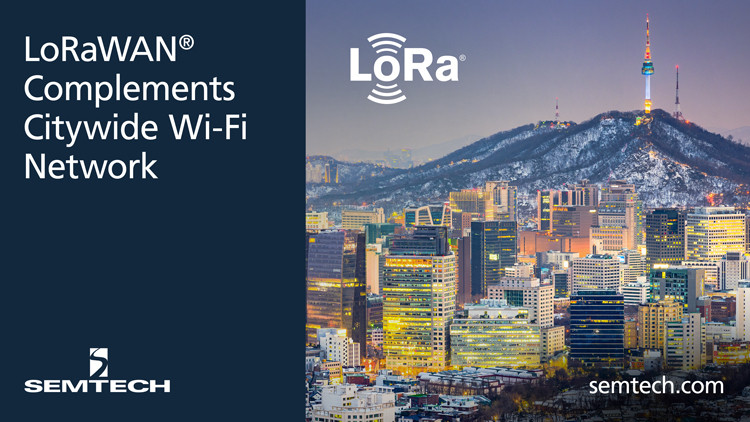 City government plans to deploy up to 1,000 LoRaWAN-based gateways by 2022 and grow its smart city Internet of Things (IoT) infrastructure

CAMARILLO, Calif., December 18, 2019 – Semtech Corporation (Nasdaq: SMTC), a leading supplier of high performance analog and mixed-signal semiconductors and advanced algorithms, announced that the Metropolitan Government of Seoul, South Korea plans to deploy a new enterprise-grade citywide network for Internet of Things (IoT) applications based on Semtech’s LoRa® devices and the LoRaWAN® protocol. The network is part of a larger plan by the city government to increase its connectivity offerings and create one of the world’s first “hyper-connected cities” by 2022. Also included in this plan is the creation of a public and free-to-use municipal Wi-Fi network, accessible to all from anywhere within the city’s limits.

“LoRaWAN and Wi-Fi cover hundreds of uses cases, many of which are highly complementary to key market segments for the future of city operation,” said Marc Pegulu, Vice President of IoT for Semtech’s Wireless and Sensing Products Group. “Applications leveraging LoRaWAN that make use of the unlicensed spectrum deliver simple, highly efficient, flexible, and secure IoT solutions. These are very important in large cities such as Seoul, where smarter municipal operations save time, resources and money.”

According to the Seoul government, the Smart Seoul Network, or “S-Net,” will provide all citizens with the basic right to Internet access through its deployment of new, ultra-connected smart city infrastructure. Main goals of the S-Net project are the establishment of a municipal broadband network, deployment of free-to-use Wi-Fi networks and increased integration of IoT infrastructure based on LoRa devices. By 2022, the city plans to deploy up to 1,000 LoRaWAN-based gateways to complement the municipal Wi-Fi and provide the foundation for Seoul’s innovative, next-generation smart city applications. The city has announced several of such applications it plans to implement following the network’s completion. These applications include smart parking using IoT sensors to connect city lots, connected street lighting solutions that automatically report to police upon detecting an emergency and a geolocation application using the tracking information of those suffering from dementia and children to keep these citizens safe. Additionally, the city government expects to increase its collection and utilization of urban data to better address the needs of its citizens.

To learn more about Semtech’s LoRa devices, visit the website.

Often ranked among the world’s most technologically advanced cities, Seoul is a world leader in Internet connectivity, being the capital of South Korea, which has the world's highest fibre-optic broadband penetration and highest global average internet speeds. Since 2015, Seoul has provided free Wi-Fi access in outdoor spaces through a 47.7 billion won ($44 million) project with Internet access at 10,430 parks, streets and other public places. Internet speeds in some apartment buildings reach up to 52.5Gbit/s with assistance from Nokia, and though the average standard consists of 100 Mbit/s services, providers nationwide are increasingly deploying affordable 1Gbit/s connections. In addition, the city is served by the KTX high-speed rail and the Seoul Subway, which provides 4G LTE, Wi-Fi and DMB inside subway cars. For more information on the city and its government, visit http://english.seoul.go.kr/

Semtech Corporation is a leading supplier of high-performance analog and mixed-signal semiconductors and advanced algorithms for high-end consumer, enterprise computing, communications, and industrial equipment. Products are designed to benefit the engineering community as well as the global community. The Company is dedicated to reducing the impact it, and its products, have on the environment. Internal green programs seek to reduce waste through material and manufacturing control, use of green technology and designing for resource reduction. Publicly traded since 1967, Semtech is listed on the Nasdaq Global Select Market under the symbol SMTC. For more information, visit www.semtech.com.