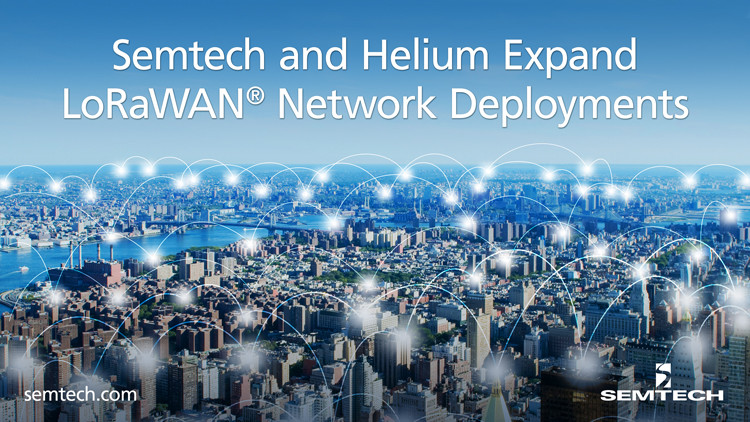 Network grows to more than 1,000 cities across North America and Europe, offering connectivity for up to hundreds of millions of LoRa®-based devices

CAMARILLO, Calif., Aug. 25, 2020 – Semtech Corporation (Nasdaq: SMTC), a leading supplier of high performance analog and mixed-signal semiconductors and advanced algorithms, announced its expanded collaboration with Helium, the company behind one the world’s first peer-to-peer wireless networks based on Semtech’s LoRa® devices and the LoRaWAN® protocol. Today, Helium’s LoRaWAN network infrastructure is considered among the fastest growing of its kind, reaching more than 1,000 cities in North America and expanding to Europe. Earlier this year, Helium announced a strategic partnership with Semtech to integrate the LoRaWAN protocol into its LongFi networking architecture.

“Helium has seen incredible growth on its network as a result of its partnership with Semtech and the introduction of the Helium Blockchain as an incentive model to the LoRaWAN community,” said Amir Haleem, Helium’s CEO and Co-founder. “As we continue to expand the network across North America and in Europe, we hope to foster the growth of the ecosystem and make new technologies and solutions available to developers, industries and ultimately, consumers.”

Helium's network is powered by the Helium Hotspot, a device enabling end consumers to own and operate a LoRa-based wireless network for the Internet of Things (IoT). When connected to a nearby Hotspot, devices simultaneously mine cryptocurrency and provide LoRaWAN network coverage for hundreds of square miles. Combining Semtech’s LoRa devices with Helium’s distributed, open-sourced approach to building a ubiquitous network allows the simplified deployment of applications across North America and Europe. In less than six months following Semtech and Helium’s initial collaboration, more than 10,000 Helium Hotspots have been sold.

Featuring a community of more than 8,000 software developers in the LoRa ecosystem, the network is currently available to connect up to hundreds of millions of compatible LoRa-based devices. Several leading IoT solution providers currently utilize Helium’s network infrastructure, including:

As part of its mission to grow its LoRaWAN network offerings, Helium has entered a multi-year strategic alliance with Cal-Chip Connected Devices, a division of Cal-Chip Electronics Specialty Products, Inc., and a global distributor and value added service provider in the IoT space with a focus on Semtech’s LoRa devices. As part of this agreement, the organization plans to help distribute Helium-compatible LoRa-based solutions, including third-party gateways and sensors, for use throughout North America and Europe.

“Semtech delivers the technology, Helium delivers the network and Cal-Chip delivers the devices. Cal-Chip has the infrastructure and technical ‘know-how’ to present solutions in an easy-to-understand manner, leading to an exceptional customer experience,” said TJ Rancour, President of Cal-Chip Connected Devices. “By leveraging our logistics, customer service and technical proficiencies, Cal-Chip Connected Devices is enabling efficient user-friendly distribution of Semtech and Helium devices to a mass consumer market.”

“Semtech is committed to the development of smarter IoT strategies which remove the complexity in developing LoRa-based products,” said Marc Pegulu, Vice President of IoT Product Marketing in Semtech’s Wireless and Sensing Products Group. “Through further collaboration with Helium, Semtech delivers end users and developers greater access to open-sourced networks and LoRa-based infrastructure. As a result, Helium’s unique business model enables ownership and operation of personal IoT networks, promoting the development of new and innovative LoRa-based applications which increase the global adoption of the LoRaWAN protocol and accelerate solution time to market.”

To learn more about LoRa devices, visit the Semtech website.

Co-founded by Shawn Fanning and Amir Haleem in 2013, Helium is building the world’s first peer-to-peer wireless network to simplify connecting devices to the internet by rewarding anyone to become a network operator. CEO Amir Haleem comes from an extensive background in triple-A video games. Helium is backed by GV (formerly Google Ventures), Khosla Ventures, Union Square Ventures, Multicoin Capital, FirstMark, Marc Benioff, Shawn Fanning and other top VCs. The network is live in more than 1,000 cities throughout North America and now Europe. More information can be found at helium.com.

Semtech Corporation is a leading supplier of high performance analog and mixed-signal semiconductors and advanced algorithms for infrastructure, high-end consumer and industrial equipment. Products are designed to benefit the engineering community as well as the global community. The Company is dedicated to reducing the impact it, and its products, have on the environment. Internal green programs seek to reduce waste through material and manufacturing control, use of green technology and designing for resource reduction. Publicly traded since 1967, Semtech is listed on the NASDAQ Global Select Market under the symbol SMTC. For more information, visit http://www.semtech.com.