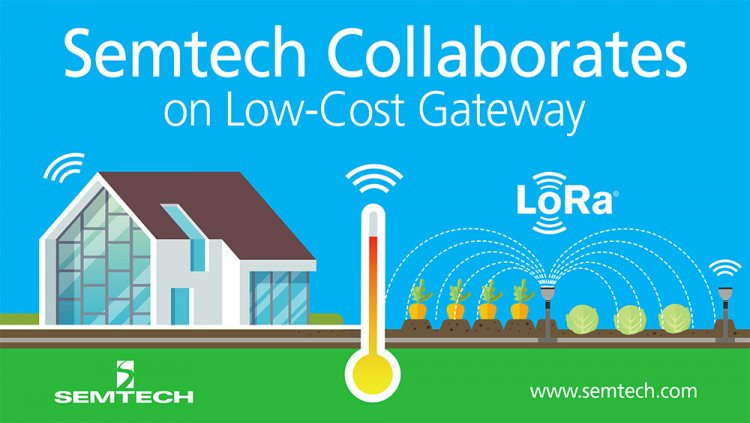 Semtech Corporation (Nasdaq: SMTC), a leading supplier of high performance analog, mixed-signal semiconductors and advanced algorithms, announces Wifx, supplier of gateways and integrated solutions, used Semtech’s LoRa® devices and wireless RF technology (LoRa Technology) for its new LORIX One gateways. Wifx LORIX One is one of the first low-cost gateways which is expected to help rapidly increase the adoption of LoRaWAN™-based Internet of Things (IoT) applications and its first model targets LoRaWAN outdoor deployment in Europe.

With over 10 years of experience in developing WiFi antennas, Wifx designed a LoRaWAN-based gateway that offers a mix of long range, low power consumption and secure data transmission that allows users to solve real world challenges with Internet of Things (IoT) applications. A single base station provides deep penetration in dense urban/indoor regions, plus connects rural areas up to 30 miles away.

The gateway is small, high performing, easy to deploy, and can be adapted to all climates with IP65 and IP43 enclosure options. This flexibility allows the gateway to be used in multiple of use cases including monitoring soil temperature in rural areas and controlling a smart building’s temperature for energy savings. The Wifx LORIX showcases that Semtech’s LoRa Technology is the predominant solution of choice for building IoT networks worldwide making the world a Smart Planet with real-world use case applications.

“Semtech’s LoRa Technology is an ideal platform to help rapidly grow the use of IoT applications,” said Sébastien Audriaz, CEO of Wifx Sàrl. “We chose LoRa Technology since its long-range, low-power capabilities gives our users a competitive advantage in their respective industries.”

“With the evolution of IoT applications, there is a need for low cost, easily deployable IoT technologies including LoRaWAN gateways, so users can quickly and easily collect data from LPWAN sensors without worrying too much about the cost of deployment” said Vivek Mohan, Director for Semtech’s Wireless and Sensing Products Group. “LORIX One gateway, based on Semtech’s LoRa Technology, provides vertical markets, including smart cities, smart building, smart agriculture, smart supply chain and logistics, and smart metering, long-range, low-power capabilities for next generation IoT applications in any environment.”

The gateway is currently available in Europe and expected to be released in the U.S. by late-2017.

Wifx Sàrl was founded in December 2005 by Julien Hoppe. In January 2009, the Witecom department was created to offer Internet, telephony, video-on-demand, and television in under-served areas. Sébastien Audriaz joined Wifx Sàrl in May 2010 and joined from his own company Média Quest, specializing in development, web and design. In 2014, Wifx Sàrl opened an online store dedicated to the sale of network products.

Semtech Corporation is a leading supplier of high performance analog, mixed-signal semiconductors and advanced algorithms for high-end consumer, enterprise computing, communications, and industrial equipment. Products are designed to benefit the engineering community as well as the global community. The Company is dedicated to reducing the impact it, and its products, have on the environment. Internal green programs seek to reduce waste through material and manufacturing control, use of green technology and designing for resource reduction. Publicly traded since 1967, Semtech is listed on the Nasdaq Global Select Market under the symbol SMTC. For more information, visit www.semtech.com.