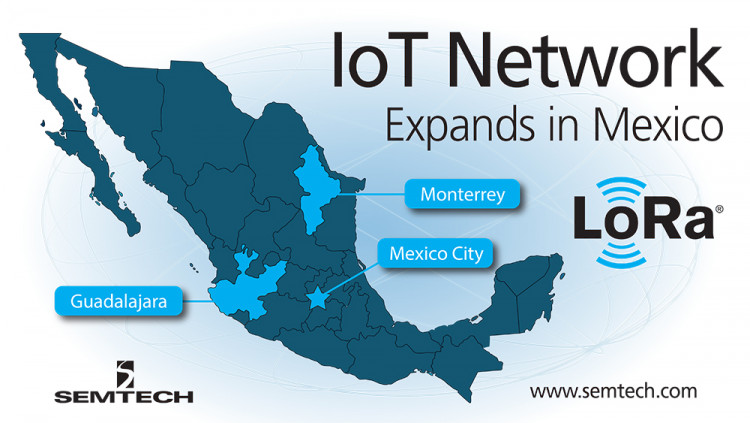 Semtech Corporation (Nasdaq: SMTC), a leading supplier of high performance analog and mixed-signal semiconductors and advanced algorithms, announced that LORIOT and Tangerine Electronics are collaborating on a Low Power Wide Area Network (LPWAN), based on Semtech’s LoRa® devices and wireless RF technology (LoRa Technology), in Mexico. The network, based on the LoRaWAN™ protocol, is expected to be deployed nationwide and Tangerine Electronics will host an on-premise LORIOT server in Mexico City to provide citizens with reliable and secure Internet of Things (IoT) connectivity.

“The roll-out of a nationwide LoRaWAN-based network is an important component for IoT deployment as several value added resellers (VAR), system integrators and IT companies are looking for better and cost effective IoT connectivity solutions,” said Marco Reyes, CEO of Tangerine Electronics. “Our commitment is to deliver reliable services using the best technology available today, namely Semtech’s LoRa Technology, with a special focus on data integrity and security for our customers.”

“We are expanding not only our LoRaWAN network in LATAM, but also our local partners’ networks around the globe. For us it is crucial to collaborate with the right partners, Tangerine Electronics and Semtech have an incredible track record in the IoT industry,” said Julian Studer, Chief Financial Officer/Chief Operating Officer and Co-Founder of LORIOT. “With more than 127 million residents, Mexico is one of the most important countries in the LATAM region and this roll-out is the start of new milestones for the IoT in LATAM.”

Semtech, Tangerine Electronics and LORIOT are members of the LoRa Alliance™.

LORIOT, headquartered in Switzerland and offices in Valencia, Budapest and Tel-Aviv, is one of the worldwide leading and fastest growing IoT LPWA software, solution providers. LORIOT is one of the most reliable, secure and especially user friendly platform for small to large industrial grade LoRaWAN deployments around the world. Our geographically distributed LoRaWAN Cloud and network is providing low-latency access to r gateways at frequency pan, back-ends and users world-wide. Since beginning of 2015, it has been delivering convincing, responsive IoT projects to our customers in more than 100 countries. It has significantly reduced their development effort and shortened time to market. For IoT network deployment, software is available as a managed or unmanaged service on LORIOT’s infrastructure, or can be licensed for a private Cloud or bare metal servers.

Tangerine Electronics, a Mexico and U.S. based company, is one of the most innovative carriers in Mexico. Starting in 2007, Tangerine received authorization from the Mexican authority (IFT) to operate as a public telecommunication service provider. Among the main public services, Tangerine operates a "state of the art” HTS Satellite Teleport in Mexico City delivering true satellite broadband connectivity to remote areas in the country. In early 2017, Tangerine received further authorizations that allows the company to operate as an MVNO (Mobile Virtual Network Operator for Cellular systems), and also to deliver wireless and terrestrial links, including telephony and data services.