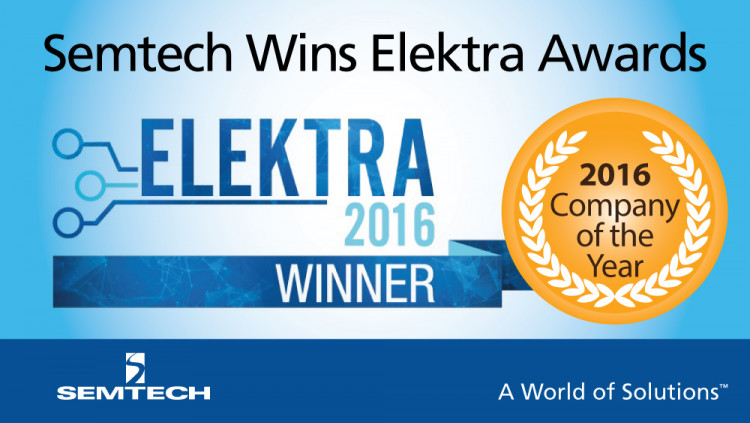 Semtech Corporation (Nasdaq:SMTC), a leading supplier of analog and mixed-signal semiconductors, today announced that it won Company of the Year and its LoRa® Wireless RF Technology won the Internet of Things (IoT) Product Innovation Award at the Elektra European Electronics Industry Awards 2016.

Company of the Year

Semtech was chosen Company of the Year for its successful efforts, working alongside the LoRa Alliance™, to standardize the LoRaWAN™ protocol, for the wide spread adoption of LoRa by leading technology companies and mobile operators in Europe, as well as for its innovations with LoRa for new IoT applications in a variety of market verticals.

Semtech’s LoRa Technology won the IoT Product Innovation Award for its long range, low power feature set and standardized protocol that has the potential to play an important role in IoT, and is already being adopted around the world. Its ability to penetrate dense urban cities, in addition to rural areas, makes LoRa an ideal solution for a variety of applications, according to the judges.

“This recognition by Electronics Weekly and its judges for our hard work building Semtech’s LoRa RF Technology and an ecosystem that enables IoT is an honor and validation of the immense progress we have made over the last few years,” said Marc Pegulu, Vice President and General Manager of Semtech’s Wireless and Sensing Products Group. “The LoRa Alliance has grown to over 400 members in less than two years, and we continue to increase the capabilities of our LoRa RF Technology, most recently with the GPS-free geolocation feature, to ensure it is an enabling component for IoT adoption.”

The award ceremony, organized by Electronics Weekly, was held at the Grosvenor House Hotel, Park Lane on Dec. 1.