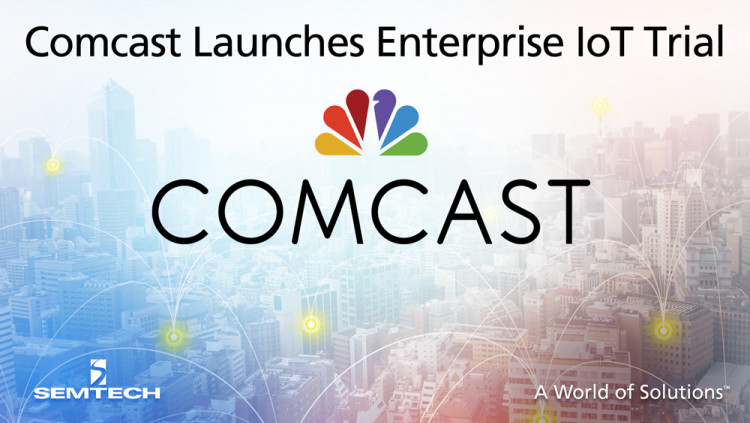 Semtech Corporation (Nasdaq:SMTC), a leading supplier of analog and mixed-signal semiconductors, today announced that it has entered into an agreement with Comcast (Nasdaq: CMCSA) regarding the intended trial deployment by Comcast of a low-power wide-area network (LPWAN) in the United States, based on Semtech LoRa® Wireless Radio Frequency Technology. The LoRaWAN™-based network trial deployment is expected to commence in the calendar fourth quarter of 2016 in Philadelphia and San Francisco, and target “smart” enterprise, government and consumer Internet of Things (IoT) applications such as metering, asset tracking, building and public venue management, security, food safety, vending, and waste management. Upon successful completion of the trials, the network could be expanded to up to 30 U.S. cities within a period of 30 months.

To facilitate an accelerated build-out of the network in at least 30 major cities across the country, Semtech has agreed to grant Comcast a Warrant to purchase 1,086,957 shares of Semtech’s common stock at a purchase price per share equal to $0.01 (“Warrant”). This Warrant will vest in several phases based upon successful completion of milestones which are generally tied to regional coverage targets as follows:

This Warrant is expected to vest over a period of 30 months and is valued at approximately $30 million based on the average closing price of Semtech’s common stock over the 10-trading day period ending Oct. 4, 2016. In accordance with U.S. generally accepted accounting principles (“GAAP”), any expense related to this Warrant is expected to be recorded as a reduction to net sales since it is being granted to a customer.

Consistent with Semtech’s historical practices, non-cash expenses associated with the granting of stock-based compensation, including those associated with the Warrant, will be excluded from non-GAAP financial measures and will therefore not impact non-GAAP net sales or earnings per share.