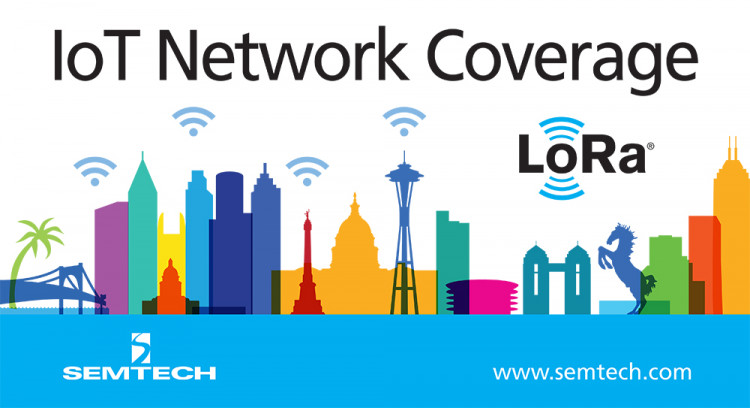 Network Coverage Based on Semtech’s LoRa Technology to be Available in 15 Major U.S. Cities

Semtech Corporation (Nasdaq:SMTC), a leading supplier of high performance analog and mixed-signal semiconductors and advanced algorithms, is committed to driving the growth of its LoRa® devices and LoRaWAN™ networks. The Company expects there will be over 60,000 gateways based on LoRa Technology installed in more than 60 countries worldwide by the end of 2017 and over the next few years, it is estimated this number will expand to hundreds of thousands of indoor and outdoor LoRaWAN gateways to support billions of LoRa-based end nodes and sensors.

“MachineQ’s expansion to a total of 15 major cities confirms the positive progress since the initial trials and is yet another indication that Semtech’s LoRa Technology is a leading enabler to the IoT industry. We are very excited by the number of fast growing markets that are increasingly being enabled by LoRa Technology, including smart cities, smart enterprise operations optimization and smart logistics,” said Marc Pegulu, Vice President and General Manager, Wireless and Sensing Products Group at Semtech. “MachineQ, utilizing Semtech’s LoRa Technology, will help accelerate customers’ IoT application adoption in the U.S. market as they look for field-proven and reliable connectivity that will give them differentiation in their industry.”

Semtech and Comcast announced their initial collaboration last year to deploy network trials in Philadelphia, San Francisco and Chicago. The trials focused on enabling use cases such as utility metering, environmental monitoring and asset tracking through LoRa Technology-enabled devices and network services.

All statements contained herein that are not statements of historical fact, including statements that use the words “estimated that,” “expected to,” “is building,” “will, “for adoption by,” “to deploy,” “plan,” “designed to,” or other similar words or expressions, that describe Semtech Corporation’s or its management’s future plans, objectives or goals are “forward-looking statements” and are made pursuant to the Safe-Harbor provisions of the Private Securities Litigation Reform Act of 1995, as amended. Such forward-looking statements involve known and unknown risks, uncertainties and other factors that could cause the actual results of Semtech Corporation to be materially different from the historical results and/or from any future results or outcomes expressed or implied by such forward-looking statements. Such factors are further addressed in Semtech Corporation’s annual and quarterly reports, and in other documents or reports, filed with the Securities and Exchange Commission (www.sec.gov) including, without limitation, information under the captions “Management’s Discussion and Analysis of Financial Condition and Results of Operations” and “Risk Factors.” Semtech Corporation assumes no obligation to update any forward-looking statements in order to reflect events or circumstances that may arise after the date of this release, except as required by law. Semtech and the Semtech logo are registered trademarks or service marks, and LoRa and LoRaWAN, and the LoRa Alliance are trademarks or service marks, of Semtech Corporation and/or its affiliates. Other trademarks are owned by their respective owners. The photo is also available at Newscom, www.newscom.com, and via AP PhotoExpress.
SMTC-P